One of the tasks for our group Making Connections was to look into the coverage of the Tribune and how it covers particular events and topics. Below I’ll be talking about just a couple of the events covered by the Tribune.

Using Trove searches I was able to see the amount of articles created by the Tribune, particularly articles on Vietnam. Looking at the trove searches helped me to find out that the tribune had a total of 2,142 digitized newspapers during the period of 1970-1979. In 1970 643 articles were found and it slowly dropped off over the years, in 1976 there was only 152 articles published by the tribune on Vietnam. 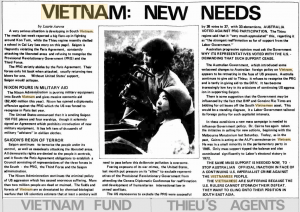 This change could be due to the end of the war in 1975 but it is interesting as there is still a fair amount of articles posted about Vietnam in the post war period. Of these 2,142 only 721 have photos according to Trove, this is interesting because there was a large amount of media presence in Vietnam but yet only 721 articles have photos. 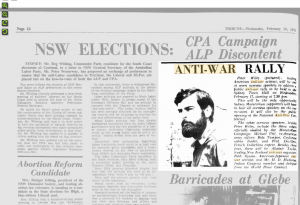 These numbers are really good for the time and show the use of negatives in these papers and interestingly the largest number of articles with photos was in 1970, probably due to the fact that the war was still going and this had a massive impact on the amount of articles written about it.

The coverage of these topics and events change over time due to the end of the war but also this thought that Vietnam was horrible idea and created a lot of unrest in the community. Seeing this war televised also had a big impact on the amount of articles written because it was on Television and people were seeing what was going on in this war everywhere.